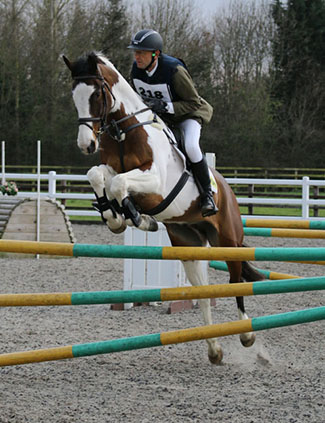 Today we spent the day at Aston Le Walls doing the arena eventing, which is a great way to get in some dressage practice, show jumping and cross country all on a good surface. It continues to amaze me how much Aston has done and has changed over the last few years and the great investment they’ve made in the arenas and fences.

We have five horses, two children, three dogs, Em, Jenny and me on board, along with a very large picnic. Good friend Fiona braved the very chilly NE wind to capture the day. It was bitter and we were all chilled to the bone by the end of it.

Josh, in many respects, had the right idea making a Lego battle in the Luton which kept him occupied all day as he couldn’t understand why anyone would want to be outside in such cold weather! Ursula on the other hand was a trouper and came outside to help Em groom and also video the horses, a top effort in such cold conditions.

I had Tonto, Drax, Dylan and Tara on board and Jenny had Ricky. All except Tara were doing the Novice and Tara did the Intro.

Tara is going from strength to strength. She is beginning to settle in the dressage and her core strength is improving all the time. She needs a season to really build the necessary muscles for dressage in converting from racing to eventing but it will come. She is so careful and clever on her feet – she jumped a lovely double clear and I was very pleased with how she took on the fences.

Drax, Dylan and Tonto were all having their first outing of the season in an eventing environment – they’ve been out show jumping and cross country schooling but doing dressage next to a cross country water jump and in a chilly NE wind was just too exciting for them all! Sadly the good work I’m getting from them all at home wasn’t in evidence at Aston today! But in many respects that was the purpose of getting them out and in some respects I’m pleased that they were all full of the joys of spring bring out!

Anyway we got thru the dressage…..

It was then on to the show jumping and cross country which I thought was well built but pretty up to height in both phases with some strong skinny questions. Drax jumped a lovely double clear and I was very pleased with him as he was much more consistent in his jump which was exciting for the coming year – unfortunately the score card doesn’t reflect the lovely double clear as I managed to jump the wrong ditch as the Novice and Pre Novice ditches were next to each other.

With the sat nav reinstalled I went around on Tonto who jumped a good clear in the show jumping, again very pleasing and the winter’s show jump training on the basics with Ros is I hope beginning to pay off. On the cross country he had a green moment at two of the early skinnies but I got him over both in the end and he jumped the ones later in the course well so it was a good educational experience for him.

Dylan was the last of mine to go in the jumping phase and he got better and better. He had a couple of early rails in the show jumping and then seemed to get out of bed and more interested and started to jump better, so again all a good learning experience.

Ricky was the star of the show as usual. He is the perfect horse for Jenny as he has all the experience to look after her and he is loving his life competing at the lower levels. They jumped a double clear in both the Pre Novice and Novice and came home with rosettes in both classes, beating me fair and square in the novice. They will aim for a one star this year with a season of novices to get mileage together.