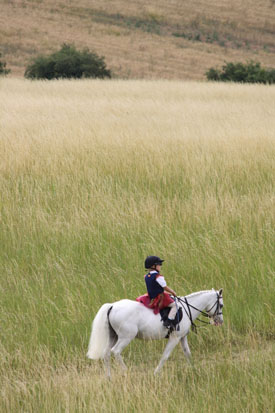 It’s been a week of pony club for Team Levett – Ursula and Joshua have been at Camp all week and I’ve given a couple of demonstrations at both of our local pony clubs – the Warwickshire and the North Cotswold Hunt. I quite enjoy doing these kind of demonstrations as the kids are usually pretty interested and ask lots of good questions and it’s nice to give a little back rather than always being wrapped up in my own little world of being an event rider and the treadmill that can sometimes involve.

Josh and Urssie had a great week; I was able to stop off and see them on Thursday on the way back from lessons with Bettina, and it’s great to see how their confidence has grown from a few concentrated days of riding and trying different things. It was a bit of a venture in to the unknown this week as Josh has a relatively new pony, Slipper, and although Slipper is a pony club veteran she definitely has a lot more gears than Peggy Sue and so it will  take Josh a little time to get to know her. It’s important at this age that the kids just have a great time and try a lot of new and different things, and they certainly did with river riding, riding in wide open spaces in the countryside, through a maze, mounted games, jumping, dressing up – the list is endless.

A good week was had by all, although we had two exhausted children to bundle in to the lorry and home last night. Their heads hit the pillow with stories from the week, Ursula of falling off on her feet while dressed as a winter fairy, laughing with her friends riding through the grass maze; Josh of river riding and his first ‘proper’ canter and falling off jumping in canter! All very funny….. I’m sure the stories will become ever more colourful over the years.

On the home front we are very much in the swing of preparing for upcoming three day events and the Gatcombe Champs. Alongside this there is the ongoing business of producing and breaking a couple at home and making sure the working pupils are developing their skills. The gallop programmes are in full swing and I’ve had a couple of dressage lessons with Bettina this week.

Hipp and Tim have also started their rehab walking programmes this week. They begin their controlled walking exercise on the walker, being led around on the walker by someone in the partition in front of them – this ensures that they don’t leap about too much and seems to keep them settled. We are not always able to use the walker for this kind of rehab work – it really depends on the injury and based on discussion with our vets we can make a plan. On the odd occasion a horse can only do its initial rehab in a straight line but this is unusual, given we’ve got a good rubber surface on the walker and as it’s luckily a large walker and pretty good for most rehab cases. Alongside the controlled walking programme both horses are continuing with the cold therapy using the game ready machine and laser treatment to aid healing.

This week we are at Carlton Park for the BYEH class with Tommy and Alex and then at Wilton with Harry, Magnus, Figgy and Moose. All are in the intermediate bar Moose who is doing the Novice. I’ve not been to Wilton for several years so it will be interesting to see how the track has developed. Magnus and Figgy are having a final prep run before Hartpury and Harry pre Gatcombe, although Harry won’t run cross country given the ground and he has been going well in that phase. I’ll let you know how it all goes.