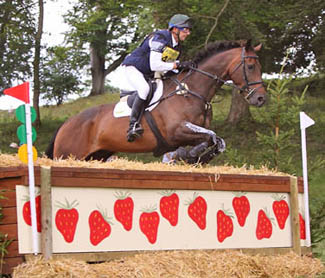 Just heading home from a long but productive day at Wilton. It’s an event I’ve not been to for many years, not quite sure why but I haven’t. I will definitely be coming back as it had some interesting cross country tracks and they’d worked hard on the ground. The event is nice and compact with a decent show jump track. My only complaint about it is the flies and midges by the dressage! Although this is something the organisers can do little to control I freely admit, but they should definitely go for getting a fly repellent business to sponsor the event as it was an essential today to survive the dressage without being bitten to death.

We set off on Saturday afternoon after galloping Coco and Bella as Clayton and Cinda had kindly agreed to put us up for the night as they live near Wilton – this meant we didn’t have quite such an early start today and that we had a good excuse to catch up with friends.

Magnus and Harry both had early morning dressage and both did respectable tests – they are improving all the time as they grow in confidence with the more difficult movements and are better able to carry themselves, and hence the quality of their paces is also improving. Figgy was doing her first intermediate and I was thrilled with her in the dressage, she tried really hard with one or two small mistakes, she was also quite relaxed which was good news as she can be a bit on her toes!

All three horses had one down in the show jumping and ironically the same fence, the first part of a double, an upright followed by two strides to an oxer. Don’t know why really, sometimes it just happens that way! All three horses jumped well around what was a poley up to height track which seemed to cause a lot of trouble.

The cross country for both the Novice and Intermediate had some interesting and different fences, which was good as all the horses are gaining experience at the moment and so educational tracks are just what we need. Of particular note on the intermediate track was a drop in to space followed by two beefy steps up and a skinny out on two strides; it caused a lot of problems especially if horses got too free or unbalanced after the drop in to space as the steps came up quickly and it was a job to rebalance to have the horses organised on their hocks enough to jump out up the steps with enough power. The waters also asked some interesting questions. I particularly like the jump in the water at the second water, something you don’t see often at an event and which I think course builders could utilise more.

I didn’t run Harry cross country as he heads to the Novice Champs at Gatcombe at the end of the week. I let Magnus run on as this was his last outing pre the 2 star at Hartpury. After his blip at Barbury I was really pleased with how he went. There were quite a few skinny/accuracy questions including bull’s heads and a strawberry to jump so he was tested and was very good on a line and over colourful skinny fences, so I’m hoping Barbury was just a one off blip. He finished a pleasing second.

Figgy was doing her first intermediate so I took her more slowly and she coped with all of the fences well. Her only ‘moment’ was at a double of trakheners where she had a look in the bottom of both parts and so needed some firm riding – she can be a bit ‘looky’ cross country but she’s improving all the time and she will get through it, I’m confident. Figgy ran a minor placing, finishing 10th which I’m pleased about for Ann and Harriet. She now heads to Hartpury 1 star and I feel with a little more training she should win a lot and continue to progress up the ranks.

My final ride of the day was Moose doing his second Novice. As the show jumping had been running late and the cross country then got backed up poor Moose didn’t have as much time as I would ideally have liked for a dressage warm up, however he did a good test with lots of pleasing moments. I was particularly pleased with the counter canter and rein back as Moose has only recently had to take on these new movements! He now seems much more settled and continues to improve all the time. He show jumped better, having two down, one an unlucky lower pole in the triple bar. He was more rideable and gave me a better feel making a nice shape over his fences. I then took him slowly cross country to continue his education – he was pretty spooky, which I think is the case when his bloods not ‘up’ and he’s cruising.

So all in all a good days work. Now for the long drive home to the Cotswolds trying to avoid the summer holiday traffic on the A303. I think a cross country route home beckons.