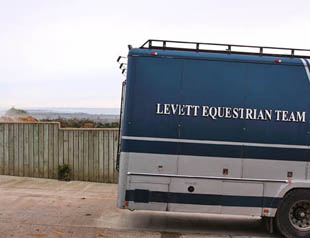 It’s been a busy couple of days and rather back down to earth with a thud after a great weekend off. The electrics packed up on the yard and despite my best endeavours I couldn’t fix it so I had to call in our very helpful (but never cheap) electrician to help sort us out before I invested in miners lamps for all the girls and horses. Anyway, job fixed but not ideal given the recently defunct lorry.

On a more positive note I took some of the horses show jumping today. It was the first time I’ve jumped Silks outside of the ‘home environment’ and he jumped like a top and seemed very even in his temperament – so that was promising. It’s always a journey in to the unknown the first time you do something with a new ride, especially one that comes with a colourful past!

I also took Fin and I was very pleased with how he jumped – he seems to have matured over the winter, in terms of his abilty to hold both his canter and his concentration, so again pleasing. Alex was on good form too, and I was particularly happy with how confident he felt as during last season he had a few blips in his confidence jumping – ironically, because he is such a good jumper I think he sometimes almost frightens himself with what his body is able to do! The good news is he’s really strengthened up over the winter and grown in to his frame and therefore (so far) feels much more confident over a fence – and importantly he can still jump as well as ever.

Finally I had the irrepressible pink pony, Tommy, to jump around. As ever he thought it was very exciting to be at a party and he was pretty tense and excitable. He settled over his fences eventually, but to begin with he was quite spooky and certainly made sure I was awake and concentrating. I had to sit with him as he’s not only excitable but very athletic. The girls also came with me and they had a successful afternoon jumping and their hard work over the winter is really beginning to pay off – so all in all a good outing for one and all.