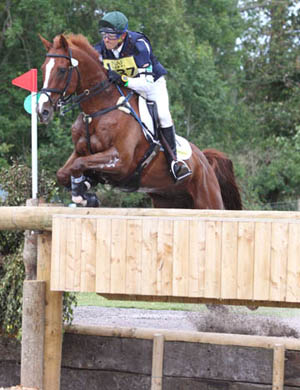 What a day. At the end of today I’m in the lead in one of the CIC 3 star sections and the 2 star! I would never have expected that at the beginning of the week – but a great outcome. All of the horses have gone very well today.

Ricky tried very hard in his dressage finishing on a 50.2, with only one significant mistake – a break in the first medium. Once we are more established as a combination I know he will do a very smart and competitive test.

It was then Coco’s turn and he did I think his best ever test to score 39.8 which I was thrilled with. He went fantastically and the exciting thing is that both Bettina and I believe there is more to come! Go Coco and I’m very grateful to Bettina who gives me such great help (and confidence!).

It was then time to run around the cross country to get it all straight in my head for Sunny’s cross country in the afternoon. I felt the 2 star cross country course had enough to do on it. However before that we had the CIC 3 star show jumping; both horses jumped really well for clear rounds. It was a challenge as they were jumping different arenas and different courses and there was limited time to walk the courses! However even this old man managed to remember them!

I then had a quick turn around to get on Sunny for the cross country – thank you back up team, especially Eleanore. The two star track was tough enough. There were a couple of bigger spreads that had the ground lower on the landing side; Sunny was so bold at these fences it took him by surprise a little bit there were times when I needed to hold him off the front of some fences as he makes up so much ground to a fence. Hopefully over time he will realise when I am trying to help him out and tell him there is a drop and he will be ready for it. The ground was OK, they have worked really hard on it – let’s hope tomorrow they have worked on the three star in the same way.

Sunny really feels like a horse who will go all the way to four star – he has scope, gallop and jump. Very exciting! We are a new combination and this is only our second event together so please keep everything crossed for us tomorrow in the show jumping. It is new territory for us as a combination.