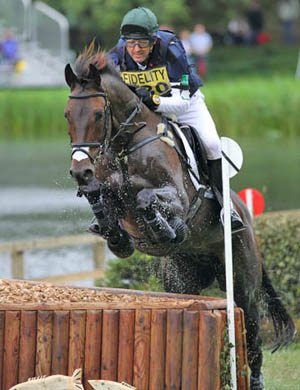 Today has been a day of mixed fortunes and overall I am disappointed but there is still a lot to be positive about.

Coco went brilliantly apart from one blip which cost us dear – he got confused at a particular fence, an upright to a ditch two strides to a skinny, he ran off the skinny which I don’t think he really understood as a question. I was in good company as William (FP) and Andrew (Nicholson) had similar problems at the same fence.

The great news is he went around the rest very well and finished full of running which gives me confidence to aim him for a four star next spring. I blame whoever wrote the programme for tipping me to win! But never mind!!

On to Harry who also went well for his first three star, going clear cross country with 10 time, we had one scary moment at fence 4 where we didn’t get the right shot and he left a leg but apart from that he went very well. He jumped many of the more difficult fences beautifully. So overall very pleasing.

Ricky show jumped this evening and jumped a lovely clear round. Unfortunately he picked up 4 time penalties which is something to focus on for the future, however he’s a great jumper and I was very pleased with his clear.

So although I’m gutted lots to be positive about and on to tomorrow. The trot up is at 7.30am so we will all be out with our miners lamps at 5.30am getting organised and walking courses etc!

I have Ricky’s cross country and Harry and Coco to show jump. Things are very tight in the Team competition, Japan are a rail ahead of us so the pressure is on to produce a clear tomorrow to gain Olympic qualification for the aussie team.

Off for an early night to prepare.