Rockingham – The Big Boys And Girls 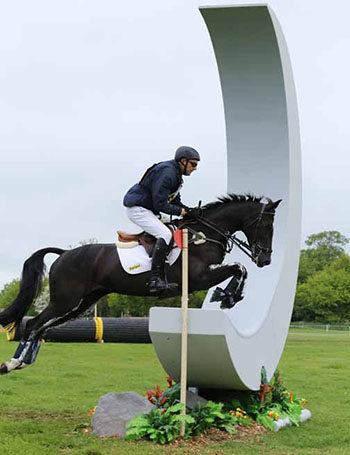 Rockingham done and dusted; I’m driving back home with five horses tonight. It all seemed to work smoothly, thanks to Emily and Laura. Laura did the Aussie side of the yard proud by being a proper little star. And I don’t want to upset anyone so I must add that the little girl from Orkney was a star as well (please Emily read this).

It was an early start as we left home at 3.30am this morning. Rockingham is two hours from home and we wanted to get two ridden and two lunged before the first dressage time at 8 o’clock. It all happened very fast and we didn’t really draw breath until we were finished at about half past three.

Drax continued to improve, and like I keep saying that’s all we can hope for at the moment with him. One of his great attributes is that he has a fantastic temperament and so is very easy to get a long with.

Ziggy again impressed at this level, leading the dressage by about 3 marks. The atmosphere got to him a bit in the showjumping and he was a bit unruly at times for two down, but gave me a really lovely ride cross country.

We had Natty out again. We are getting to know her more and figure out which bits work for us. She jumped another great double clear which is very pleasing. The intermediate track created enough problems and there were two fences from the Olympics, the horse shoe and moon, which some horses took exception to. But the first water was the one which created the most problems, coming round into trees with just a log in but a few JCBs on either side which made some horses back up a bit. Thankfully all mine jumped through well.

I was quite nervous about Natty being strong today as I went a little quicker than I did at Aston but she felt great, giving me a lovely ride and listening to me at fences and not pulling too much in between either. I didn’t wear a watch with her and didn’t think I went very fast at all but we only had 2 time faults so she is obviously deceptively quick!

Rockingham continues to be an event I would go back to as they put a lot of effort into the ground and as they have more going on and the atmosphere is greater it’s a good experience, especially for the younger horses.

After I had finished with the three intermediates, we had Alex and Dotty doing the advanced intermediate. Dotty was so excited to be out in the dressage, and I think probably produced a test to be forgotten about. She tried very hard in the showjumping and had two rails, not bad for her first proper advanced course. She, as always, was great cross country, having a lovely time and giving me a brilliant ride.

Alex was also in a slightly bright mood, but still worked quite well on the flat. He had an unlucky rail in the showjumping, and because the ground was good today I took him for a spin around the cross country which he really enjoyed.

No competitions this next weekend, so Jenny and I are taking the kids up to Norfolk for a bit of a break, as well as helping Jorn get a good result at Houghton 1*. I’m hoping the weather will be nice for family time and training! Jorn could be quite competitive with a top 5 placing well within his reach. And if it doesn’t come off it won’t be for lack of effort on Jorn’s part as he has worked hard on his horse since being here and has had some nice results so far.