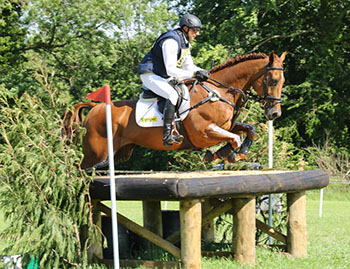 The last day of Nunney is over and we are trucking back home. It was another early start this morning as we left home at 4am and all in all it was a really beneficial day.

Some people thought the intermediate and 2star courses were quite straight forward, but when I walked those courses I thought there was a good variety of tests and it was very educational. It definitely was not easy, and at the end of the day, after seeing the leader board, this proved to be the case.

Unfortunately the rain we had at home and in the north of England did not make it down to Nunney. Keeping this in mind, they worked really hard on the ground and produced decent ground under the circumstances. It was certainly not ground I’d want to run fast on but, if you took your time, it was a good experience for the horses and not too jarring under foot.

Sparkles started the day off really well jumping clear in the CIC class. He continues to be a really straight forward horse that allows you to be competitive! I decided not to run him x-country as he is entered at Aske in North Yorkshire in 10 days time and with the rain they have had up there, I’m thinking I’ll probably get better ground.

Ziggy led the dressage for the second time in as many competitions but unfortunately had one down in the show jumping. This really wasn’t his fault as I was all warmed up but the order to go in to the showjumping was unclear and I ended up waiting almost ten minutes to go in. By this time he has slightly lost concentration and had the first fence down. Across country Ziggy continues to impress as every time he is put in a difficult situation and you wonder if he will understand what he has to do, he (so far) always seems to make a good choice and this is how he was today. He continues to be a very competitive horse, and if I can get him a bit fitter, I will be able to chase down those times.

It was pleasing to see Natty more relaxed in her dressage, she also jumped a lovely clear round in the showjumping. She is such an athletic little jumper, she makes that phase really easy to ride. X-country today she was too strong. I spent most of my time on the course just trying to slow her down! I have a few ideas how to sort that out so I’m hoping over the next few weeks I can get a little more consistancy.

It was so nice to have Alex out and he did not disappoint, doing a lovely dressage test followed by a lovely double clear. I’m just hoping that this autumn he can put together some really good performances at 3 star level, and the way he feels at the moment that could be a real possibility.

We had two lorries down at Nunney today, I had four horses and Hayley (from South Africa) and Missy (from America), who are both based at our yard, brought their horses along to do the intermediate class. Hayley is getting her horse Cuppi ready for Blenheim in September and Missy ideally would like to go Le Lion for the young horse championships in October. Both quite serious goals, so it was nice to see them both come out and jump double clear. Let’s hope they continue in that vein and have the satisfaction of achieving their autumn ambitions.

So overall, it’s been a good weekend for the horses. Different things learnt about every horse. A positive experience all round. I will certainly, where possible, be returning to Nunny again.