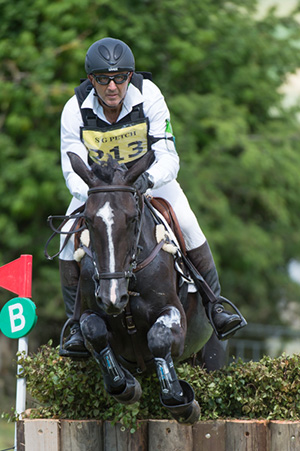 After a lovely day down in Dorset for Sam and Lucy Griffiths’ daughter Eliza’s christening, it was an early start this morning going in the opposite direction; Aske Hall was the destination.

Although it was a long drive (about 4 and a half hours) it is an event I used to go to regularly. Aske Hall has a new team this year and they certainly provided a lovely event for all the riders, and I believe quite a lot of peope were on the wait list wanting to get in. There were plenty of people at the event who were surprised to see me, saying quite a few times ‘you’re a long way from home’.

At this time of year you have a better chance of getting good ground up north as they just get more rain. Fortunately last night Aske Hall had heavy consistent rain all night which certainly created a nice bit of give in the ground. The course asked a few questions but was fairly straight forward, which I think is about right, seeing as it’s an event with a new team. They can develop a few more questions on the cross country over the next couple of seasons.

Alex, Natty and Sparkles were the horses we bought up to Aske. When I saw the course it had lots of skinny brush fences, which I thought would be a good education for Natty, who didn’t get her eye on a skinny at Nunney and ran past it. Today there was nothing of that and she locked on to every fence and jumped a lovely double clear. She seems so brave, all I have to do is get the brakes a little more sorted and then I think we will have a really nice partnership.

Alex got another run under his belt which was needed, just to get him back in the groove of regular competition. He was very well placed after dressage and then had an unfortunate rail in the showjumping but felt back to his best cross country. I think he is now quite well set up for his first advanced run at Aston in a couple of weeks.

Sparkles was out again today. He was fairly inattentive in the dressage but jumped a lovely clear showjumping. I didn’t run him cross country as he’s still young and I think I will wait until Aston. Most times when I travel up north to events it’s well worth the trip as the organisers are always so accommodating and friendly and really try to put on a high class event.

I’m driving back down the M1 now trying to get home, keeping everything crossed as we haven’t hit much traffic. We go to Paul Tapner’s 40th birthday party, and George and Paul’s tenth wedding anniversary tonight. It’s a smart affair with an interesting dress code of black tie and wedding dresses. Jenny’s wearing her wedding dress for the first time in 15 years! We’ll be a bit late but it should be a good night.

I’m not thinking about tomorrow yet as it will come round soon enough. So all in all a good day for our two boys and one lady; there will certainly be some exciting classes for them in the not so distant future.