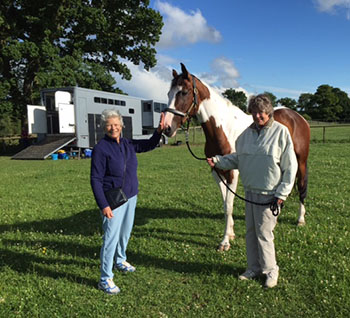 The end of a couple of long but happy days as we now head home on the M6 toll from Eland Lodge.

It was a funny day weather wise with some beautiful weather most of the day and then a huge storm at one point, which fortunately I managed to avoid but Jenny didn’t. It was a day when we were both competing and it grieves me to say that Jenny came home with the rosettes and I didn’t! But not wanting to feel left out I too got wet by managing to have a fall in the water jump when Matt, who I occasionally ride for Philip Adkins, stumbled and went down on his knees, poor horse.

Eland Lodge is not far from Birmingham so easy to get to and it is a very nice event for young horses, with a lot of effort being put in to the cross country course and some really good variety in the fences. They had worked hard on the ground and also had lots of all weather take offs and landings to take the jar out when jumping. The courses run up to Novice and it’s an event I would regularly like to come back to.

Today Jenny had her usual Cassie and Ricky and both those partnerships seem to be gelling really nicely which is good. I in turn had Dylan and Tonto as well as riding two for Philip. As I’ve said before Philip’s horses are older and I’m just keeping them ticking over for him.

On the flip side Dylan and Tonto are still only half way through the year of their first proper season eventing. Today was a day when Dylan walked off the lorry with mischief in mind and he’s a bit hard to manage when he’s in that frame of mind, especially in the dressage, but he had a good show jump and cross country ride.

We had a nice moment early this evening, with Carol and Veronica grazing the horses with Jenny in the clover paddocks by the lorry while I and the girls packed up. It reminded me of the old days when I was getting started and they were my only owners.

They had a nice day as they can continue to see improvement in Tonto at each event and especially today.

All in all in the last two days we’ve been to two events and in both locations the organisation and committees and volunteers have made us feel very welcome, so well done to all involved with Eland Lodge and Aske Hall.