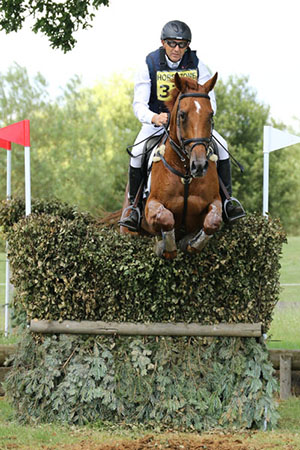 Trucking home from day two at Aston and, as miserable as it was yesterday, the rain certainly made for very nice cross country going today. It was so pleasing to get a good advanced run for Womble, Alex, Dotty and Natty.

The day started off with Womble and Alex’s showjumping. We had a bizarre incident with Womble in the warmup where he threw in two stops and we couldn’t figure out why; as things transpire it was a shadow on the landing side of the fence which left him feeling a little confused. Once we changed the flags around and came from the other way he was more than happy to get on with the job in hand. He jumped well but was just unlucky to have one rail. He slightly touched the fence and it was only after he had jumped the next did the rail hit the floor.

I actually thought I had jumped a clear round on Alex but it turned out he also had an unlucky rail. He was very relaxed and let me ride him in a lovely rhythm so it was a shame. Over all the boys were very good. We did their cross county next and they both gave me a super ride. We played around with Womble’s bitting for cross country and I think we have got things a bit better again. Alex was slightly quicker than Womble as with the ground being so nice it was a perfect opportunity to jump and gallop at speed, making it a great set up for his CIC 3* coming up at Hartpury. Once the boys were finished up it was the girls turn.

Dotty tried very hard and got better as the round went on, but unfortunately had three rails. Natty, although still needing to relax more, jumped the only clear round of the day for team Levett. It was on to the cross country then and it was both girls’ first advanced run. Although they were a little green in places they went superbly, both jumping clear and holding their lines. I couldn’t be more pleased with them. It was lovely for Vanessa, who bred Dotty, to be able to say she is officially an advanced horse. Neither of them will do their best work until next year so lots more to come and nice to know all the ability is there.

My parents were able to come and watch today, they certainly picked the right day weather wise and nice for them to see me jumping round on the advanced horses. Back tomorrow with Sparkles and Ziggy in the intermediate.