Eland Lodge – We’ll Be Back 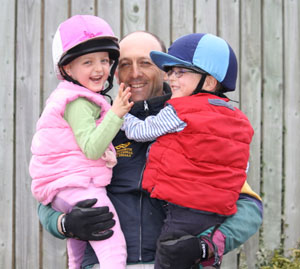 Just back from a good day at a new event for me, Eland Lodge. The day didn’t get off to a good start; I’m not known for my sense of direction and today was no exception. Jenny had built in an extra hour to my travel time to allow for the potential for me to get myself lost and I needed that and more! For some strange reason I even managed to take the wrong turning early on in the journey on to our nearest motorway, a route I take as  regular as clock work. It then went from bad to worse and finally after several U turns and much huffing and puffing I got there – and will remember the way for next time, as I will definitely be back!

So poor Fin didn’t get quite the warm up for his dressage that he deserved, but despite my tardiness he tried hard, although he is still very green in the dressage department but it will come and he’s a lovely young horse with a great mind and I enjoy riding and training him. After our frantic arrival  (it was all hands on deck with me changing and three people tacking and studding Fin and then a dash for the numbers) the day returned to a more civilised pace.

I only had two to ride, Fin and Tommy as Mannie has been sold and Alex has a bruise from treading on a stone – Eland Lodge came a few days to soon for him, he’ll be fine in a few days. Eleanore and Darian were competing Puzzle and Keedy and Jenny was riding Buzz so we had a good day, enough on but not crazy.

As I said Eland Lodge is definitely an event we will be adding to our list – the show jumping is on a surface and the cross country course is inviting and educational with a lot of variety. They had clearly done a lot of work on the cross country ground, and roping and presenting the fences well. The ground had been aerovated  and I think watered including the cross country warm up and was excellent – the course is undulating with variety in the terrain (e.g, a wooded area) and range of obstacles. My only point of feedback would be to make sure the dressage warm ups are on as good a ground as possible as well as this was definitely firm and a little rutted in patches and drying out fast.

A jump on and off a bank area with a ditch in front of it caused a lot of problems. I think the reason was that many people, in my view, didn’t ride the fence positively enough. Yes you need a bouncy collected canter and it is definitely not the kind of fence to gallop at, but you cannot approach it on a backward stride as your horse will naturally back itself up – you need enough petrol in the tank coming to it and if you think your horse might have a look, over ride the last few strides but do so from an organised balanced canter  – hold the horse together with some impulsion!

Anyway back to how the horses went. Fin after his eventful start to the day, then jumped a lovely double clear. He was really watching his fences cross country and is beginning to build a partnership with me and he gets his knees up and gives me a great feel especially over the cross country fences.

Tommy also went well, he is an extremely athletic and somewhat precocious horse. He did one of his best tests to date; he is concentrating more and was only distracted on one or two occasions this time around. He gave me an interesting ride in the show jumping and I definitely had to have my wits about me. He was very excited in the warm up, which is on the small side but nothing much can be done about that and they’ve tried to manage it by restricting the numbers of horses in the area at any one point in time. However Tommy found it all very exciting and I had to hang on tight a few times. In the ring he jumped well but had a last minute spook at some brightly coloured planks and I had to hang on round his neck much to everyone’s amusement. He also then went well cross country and is gaining in confidence – still spooky at fences with flowers/colour and  much dressing but improving all the time.

Eleanore and Darian rode well and had a good day especially in the jumping department where they are both improving all the time on two very different horses. Jenny and Buzz also had a good day after a less than great experience at Weston in the show jumping – and for once I managed to beat Buzz/Jenny in the dressage on one of my young horses – now that doesn’t happen very often.

We are now home and have a day off tomorrow, bar a visit from Anna Johnson to give Hipp and Tim the once over before Badminton, Maggie Turner is our physio at home but Anna has always helped us at three days; Anna and Maggie have similar approaches and work well together and it works for us and them as Maggie is flat out also with racing clients so is hard pushed to get to three day events and Anna has many years of experience having been the British team physio for many many years in the past. So tomorrow is ‘handover’ day. It’s also a family day as Anna is a good friend and her children get on well with Joshua and Ursula so tomorrow will include some much needed down time to recharge the batteries – plus some teaching at a near by clinic. Never a dull moment.