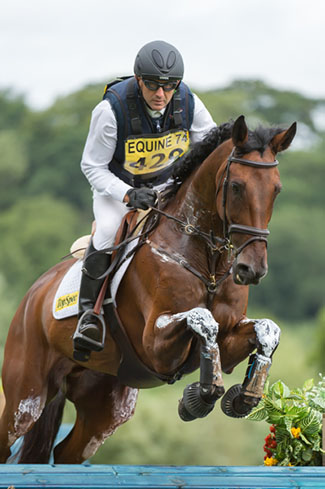 We’re heading down the M6, driving home from day one of Somerford, and thankfully at the moment we haven’t hit any bad traffic. We’ve had four out today, including the two most experienced boys, Womble and Alfie, and they both did nice dressage tests and double clears. I really couldn’t have asked more from either of them.

Somerford have again produced a really nice course. There’s enough going on but the tracks really seem to flow. It’s Wombles last run before Burghley and he feels so in the groove, I’m hoping that will continue on to two Saturday’s time!

Alfie’s back in full work now getting ready for Pau; the next eight weeks will be quite intense as he gets fit for his autumn 4*. He’s feeling well and he made the intermediate track today feel very easy.

Sparkles was out as well, doing his dressage for the CIC2* which runs over the three days. This year he continues to be a horse that just wants to please and do the right thing. He got a fairly competitive score and if we can, it would be nice to achieve his CCI2* qualification.

It was a big day for Tonto today as he was doing his first ever novice. He put his best foot forward in the dressage, doing a lovely test and even getting a 9 for one of the movements. As soon as we took him to the warm up he felt more settled than he has been the past few months and this showed in the test. It’s always exciting for the owners when you have been working hard for a while to improve a horse and it suddenly produces a much better test, and so we all took pleasure in seeing Tonto further up the leaderboard after dressage than he has been.

The showjumping was a little disappointing as he seemed to get distracted and ended up having 4 down, but he redeemed himself on the cross country going clear around what was quite a beefy novice. Like with all babies we can’t read into one days performance too much and I’m sure with time he will be a careful show jumper. I must take my hat off to him today though as with all those bigger jumps he was genuine to go forward and jump them all.

So we are back up over the next two days so hope for more success ahead.