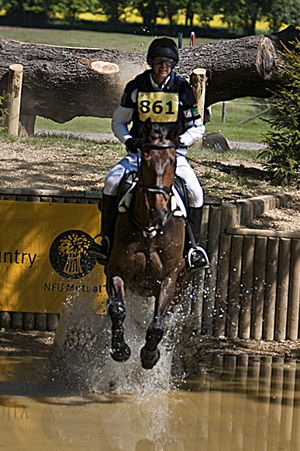 It was another early start this morning as Coco was doing dressage at 8.10am. It wasn’t his best test as he was a little fresh and inattentive, breaking in the medium trots and the walk – however I am confident I can get a more settled test from him when required as ideally he needs two works, but I wasn’t up for no sleep last night and felt 4.30am was early enough to wake on a Sunday morning! He’s got it all there and I had only ever planned to do the dressage with him – he was still on a 46 and about 4th after dressage so it wasn’t all bad.

Magnus did the intermediate and jumped a double clear around a strong track. The dressage is still work in progress and I experimented with a double bridle today which made him more rideable but I’m not convinced it’s the right bit for him, I may try another type of snaffle. I’ll keep progressing with the training and experimenting – he will do a smart test soon enough.

He jumped a lovely show jump round and took a bit of riding cross country. Brigstock is a big, old fashioned cross country track with lots of big ditches and a good variety of fences, so I was pleased with Magnus that he took it on and it will certainly have brought on his education. He stumbled at one of the skinny combinations and I ended up around his neck but he kept going forward and we were clear – just not my prettyist moment! At the end of the day I was surprised to finish 3rd but thrilled for Binnie, Colin and Niki, his owners, that he did so as they’ve been really patient with him (and me!)

I then had to get back home to interview someone for a working pupil position which was good, and she will be joining us later in the summer – we are very lucky to have a great team, which is so important to the effectiveness of the yard.

I also jumped Harry and Bella this afternoon to practice some accuracy questions ahead of Houghton and Bramham. I feel Harry and Coco are now all set for Houghton and Bella is going well in advance of Bramham; I’m going to take her to Houghton to do the dressage and show jumping.

I head up to Houghton on Tuesday morning as Harry trots up on Tuesday afternoon. I’m hoping we will get some rain before the end of the week so that the ground will not be too hard; we all enjoy the sun, but I would really like some rain before Harry and Coco have to run cross country at their three day this coming week. We’ll assess things when we get there, I’m sure the Houghton team will have done as much as they can with the ground.

Anyway I  must run as we are cooking dinner for the team tonight as Emma is leaving at the end of the month and so we are having a goodbye meal for her. I’m also off in the morning very early with Jenny and the kids to pick up my parents from the airport which will be very exciting. They are coming over for six weeks. They are sadly arriving on a really busy day as I have to give the horses a last canter before their three day events and we have Tracey the saddler fitter, Nick the farrier and Gerry our stand in physio (as Maggie is off sailing on holiday) coming to check them all over before we depart.