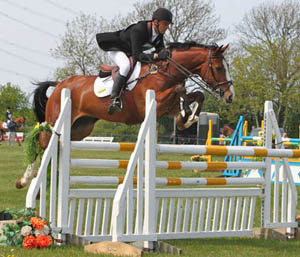 It’s been a much quieter day than I’d hoped for at Withington as I only had two show jump rounds in the Advanced class. Given the lack of recent rain and drying wind I felt that despite all the work they’d done on the ground the risks of running the horses cross country outweighed the benefits in my mind. Frustrating but sometimes it goes like that.

As a consequence I spent the morning at home giving a good send off to my Aussie friends and then riding a couple of horses and teaching some of the working pupils.

Joshua came with me for the ‘road trip’ as Ursula was at a party. We had a nice time trucking down to Withington and he’s certainly growing up fast. The Organisers had worked hard on the ground in the show jump ring and had put lots of sand down on the take offs and landing spots in the warm up area. Coco jumped OK for one down, he felt a little tired but he is at his maximum in terms of his work prep, cantering every third day and on non canter days working twice a day eg flat in morning and hill trotting in afternoon.

Harry didn’t jump his best round, he was just casual over a couple of fences early on, but then he seemed to switch on and jumped much better for two down. He will keep improving I’m sure. It was then time for ice cream before dashing home for a family party to celebrate my mother-in-law’s birthday.

This week is again varied and interesting as I’m at the gallops tomorrow, taking a few show jumping on Tuesday, at Moreton Morrell on Wednesday with the girls and on Thursday myself before back to the gallops on Friday. Never a dull moment.