Burghley Dressage – a PB for Tim 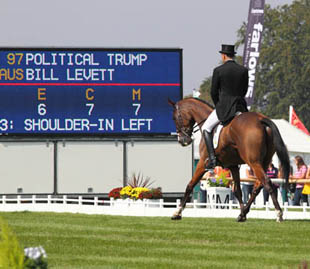 Tim did his dressage just before lunch today, he tried very hard.

He was very tense and excited at the trot up and so I was concerned when we went in to do our dressage that he would get very over the top. However as I trotted around the outside I knew he was going to try hard. For him he was a really good boy. We’ve not had the ideal preparation; he’s not run competitively anywhere since early June due to a series of little niggles all of which have thankfully now passed. So it was a big relief that he tried so hard.

Apart from a few little mistakes it was I thought a good test. Unfortunately he jiggled slightly in his first halt which is never ideal as I think the first entry and halt is so important to set the tone for the rest of the test, so that was a shame.

Dressage is now behind us and has left us on a 51.8 which is a personal best for Tim, so that can’t be bad. I wish Tim was 10 and his career was ahead of him but sadly he’s 16 and he, like me, is not as young as he might wish to be!

I’m looking forward to the cross country tomorrow. I think the track should suit him but you never really know until you ride a track and Tim has also got to be ‘up for it’.

I’ve walked it again a couple of times today and will do so one final time in the morning before the action kicks off at 11am. I’ve not out until 1512 which will give me a chance to watch a few.

Let’s hope I have good news to report on tomorrow.