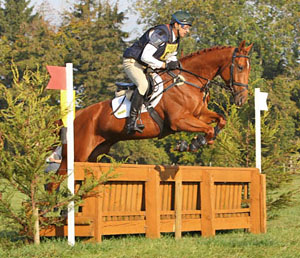 Another scorching hot day at Dauntsey today, wonderful if you are spectating but a little warm if you are riding all day even for me an Australian!

Anyway the day started bright and early with Alex in the Novice. He did a nice test, a little inattentive but pretty correct. The show jumping track was up to height and pretty ‘looky’ especially the last treble which looked a ‘sea of poles’ as one approached it. Alex jumped a lovely round until the treble where he made a green young horse mistake half putting down again which led to a few poles clattering to the floor at this final combination. I’m not concerned as he’s a good jumper and it’s just a young horse thing.

He then gave me a peach of a ride cross country over what I thought was a great track with lots of variety. It seemed to cause a fair few problems but I’m not 100per cent sure as to why as it’s a lovely track. There is a strong combination of fences at about fence 6 with a hedge then a right angle turn to the next fence which had a ditch to the fore of it and a light rail set to the back. It’s a big fence and requires forward accurate committed riding but rides very well. It is swiftly followed by two offset hedges on a single stride which again rides well as long as you have plenty of petrol and commitment. A little later there is a log drop in to a quarry with a skinny brush on the way out which requires accurate riding and then later still a jump on and off a bank to a corner and a bounce coming out of the first water crossing which rides well and is again a good educational experience for a horse.

So all in all a good track with good grass cover. I also had Obi doing his first Novice with me and I managed not to fall off him in the show jumping today. Cross country he was held on course at fence 12 which is never easy but seemed to cope ok with the hold which is always a mental test for a horse. He jumped a nice clear – he needed positive committed riding but is a good jumper and responded well, so I was pleased with him. He ended up in 5th place which was good for his first Novice with me.

The girls and Jenny all went well, each having one down in the show jumping and jumping nice clears cross country which I was very pleased to see! A great result for all of them.

My final ride was Moose doing the Intermediate Novice. He tried hard in the dressage but was a little off the pace, then had two down show jumping which was a shame but ended on a high cruising around the cross country. He gave me a much easier ride than at Gatcombe and really ate up the ground – he’s a fun horse to ride cross country at this level.

It’s a quick turnaround to get home and get organised for tomorrow at Little Downham. I’m riding Fin, Alfie and Womble in the Intermediate and Hipp in the Advanced. Report back tomorrow.