And The Kids Take Over 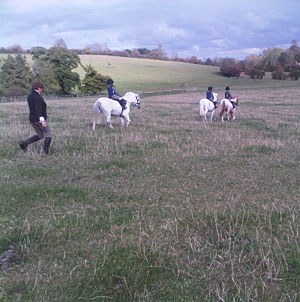 My season may be over but the kids are only just getting going. With half term upon us the last two days Jenny and the kids have been off with Gracey at Pony Club rallies. Josh and Ursula were excited and amused as the rallies have been at the two venues I use most often for show jumping and cross country schooling, Allenshill and Grange Farm, Swaycliffe. SO the kids thought they were quite the thing training at the same venues as daddy!

Thankfully the rallies went off without serious incident. Urssie was on her new pony Toddy and it’s always a slightly anxious moment with a new pony, even if you know it’s a saint and has done it all before. Toddy was a star and Urssie tried incredibly hard and stayed completely relaxed I’m told – she is such an earnest pupil at all times, bless her. Josh and Slipper also had a good time, although Slipper got slightly too big for her boots at one point at the cross country rally and bucked poor Josh off, despite his best efforts to imitate a limpit and stay on.

Anyway Jenny and most importantly the kids have a programme of hacking planned for me over the coming weeks – as they’ve recently discovered that there is much fun to be had outside of the school and so I’m being roped in to go hacking with them. Hacking is not a pastime I enjoy and I usually claim I’ve got nothing suitable to ride but Jenny is threatening to lend me Bluey, and Bertie is also a great horse with ponies so I’m running low on excuses.

So think of me when you are all tucked up inside in the warm and I’m roaming the countryside with two small children and their ponies!