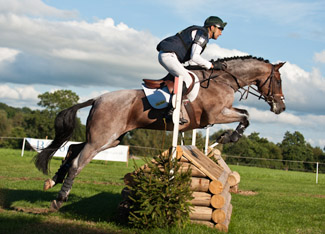 Tommy was in the money today at Somerford: he was frustratingly pipped at the post by one second cross country as both myself and the winner were on the same score and clear inside the time. Never mind, to finish on a score of 20 in his first Intermediate Novice can’t be bad!

JJ also went well today with a nice dressage, and lovely cross country, sadly he rolled a couple of poles – he was a bit underconfident post being tried by someone this week who I will say, being polite, rather landed him in the middle of a few fences, poor chap. However he got his confidence back by the end of the round.

Crunchie and Dotty had a pretty good day – they are both still getting to know the ropes as Crunchie is green and Dotty’s a baby still. Crunchie did a better dressage, jumped like a stag in the show jumping and was relaxed and brave cross country; he’s still quite tense but it will come. Dotty did a better dressage but I felt she was harshly marked and then rolled a couple of poles in the show jumping – just a bit casual over the smaller fences, and then went like a complete star cross country, grown up beyond her years, bless her.

I had a good walk around the 2 star cross country which I think is a well built and very fair track – there are a couple of very meaty questions, particularly a double of corners towards the end of the track which will take accurate riding.