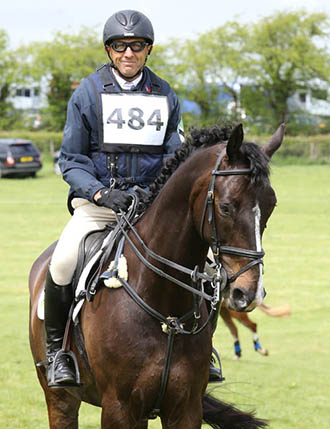 Today the yard has ‘split in two’, with Jorn, Harriet and me heading to Withington Manor with Ziggy and Vicco Pop, and Jenny, Missy and Poppy heading to Bradwall. For all the day started rather wetter than any of us would have liked and rather earlier for some (thank you Poppy!), thankfully the rain eased at both events and the ground was good at both venues.

Ziggy was having a last Novice run ahead of stepping up to Intermediate at his next outing. He did a nice test, and then jumped very well, just rolling the last show jump which was annoying. We then had a nice run around the novice course, which is up to height but very well presented – Ziggy went very well and I feel confident that he’s ready to step up to Intermediate in a few weeks time.

Jorn also had a good run as part of his UK plan pre Houghton. He rode very well cross country and I was very satisfied to see him execute all of the things we’ve been working on together in his cross country riding – so it was pleasing to watch. Withington is a great viewing course and so I was able to keep an eye on his whole round!

We both ended the day in 5th place and I was personally relieved to get my last cross country round pre Badminton under my belt – as although I’m on very good horses, it’s always in the back of your mind that you mustn’t fall off just before a big goal like Badminton!

Jenny and Missy had a mixed day. Ricky was a star and gave Jenny a lovely day out with Ursula jumping yet another double clear with a good dressage, but yet again she stopped off for tea and biscuits and so she dropped from second to fifth with a couple of time faults. Ricky is rather enjoying the more leisurely form of eventing that Jenny, ably assisted by Ursula, undertake! Missy sadly didn’t have the best of days in the show jumping but there were lots of positives in the dressage and cross country and it’s early days as she is still getting to know both horses and build a partnership with them.

I came back from Withington in the sunshine and rode Alfie on the flat; he feels good and ready for his big week ahead. I’m teaching a cross country clinic at Aston Le Walls tomorrow and then we will get packed up on Tuesday morning and head down to Badminton – it is such a special event to drive in to. I just wont think about it quite yet………24 hours to go.