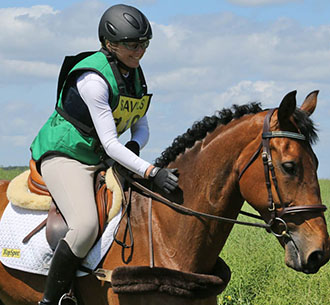 We had a lovely day at one of our local events, Ascott Under Wychwood – the sun was out, accompanied by the wind. Over the years it has developed in to an event which is not over testing cross country but one that gives young horses confidence and brings on their education.

As the seasons have started to change the ground is beginning to firm up but the ground at the event was decent as they had clearly done a lot of work on it. At the moment gone are the days of good to soft ground. For the time of year you wouldn’t find much better going.

While Urssie was off at the Welsh Vaulting Championships (kindly taken by George T who’s daughter Maddie is a keen vaulter and they are on a team together) Jenny, Josh and I were off eventing, Josh being number one helper and videoing, and Jenny riding Ricky and Cassie (their first ever competition together). It was great to see Jenny giving both her horses real confidence across country as even for a professional it is always difficult to ride a horse you’ve never competed before. Suffice to say both of Jenny’s rides looked full of confidence right through to the end of the course and seem like they will move positively to their next runs.

I was riding Dylan, Tonto and two catch rides for Philip Adkins, just keeping his horses ticking over while he’s away on business. I won the Be100Open again on Matt with a smart dressage and double clear and Philip’s other horse was just out of the placings having rolled a pole.

Dylan has been the sort of horse that can be very settled but then find something to spook him and become quite fracious in the dressage warm up, which can make him a little bit of a handful. Today he was more settled in the dressage and he was mentally more with me. He did a nice test and jumped a double clear which was pleasing.

Tonto, in different ways, is at a similar stage to Dylan where his basic work is getting established and improving but in the dressage ring little errors and inattentiveness and lack of straightness loses marks in a test environment. He has the potential to do well in time. It will come. Cross country and show jumping was good, with moments where it is improving coupled with baby moments.

With young horses it’s very important to be patient and that’s what this year is all about. In another year these horses will be stronger and have the basic education – the exciting thing is that I think both Tonto and Dylan will make upper level event horses.

Overall another day of producing babies made more enjoyable by having owners and my family with me! Thanks to the Crown Farm team for putting on yet another lovely event.