No Ribbons But A Good Weekend’s Work 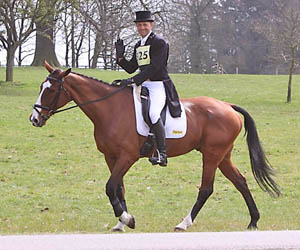 I’ve just finished two days at Weston Park and all in all the horses have gone well although I didn’t come home with any prizes. Yesterday I had Figgy and Magnus in the Novice, both went well particularly cross country. I’m still getting to know both of them so the dressage is very much ‘work in progess’. Both horses are good jumpers and basically jumped good show jump rounds and were unlucky to have a pole. The going at Weston was almost perfect on the cross country but it was a little tacky in the show jumping and so the going coupled with a ‘poley course’, few fillers and lots of light rails meant that clear rounds were few and far between in all classes.

Janet and her team have done a lot over the years to improve Weston – the dressage is now in a much better spot although it is a little ways away from things and you have to ride across parts of the cross country which can make for some interesting moments in a dressage saddle! Once there though the arenas are nice and flat and they dress them with flowers etc.

I felt all three of the cross country courses this year were, as usual, well built but a little more inviting than they sometimes can be with lots of nice ground lines and educational lines which would teach a horse something without being overly testing. All three tracks were a good introduction to a horse at the ‘next level’ or made for a nice ride round for a horse aiming for its spring three day goal.

He has a great gallop stride and doesn’t get on the bridle; he jumped all of the difficult lines and had a silly glance off at the last corner (the second last fence) which in hindsight was really my fault as I saw a nice forward shot and in retrospect on a horse with his experience I probably should have been more cautious given he’d already had to take on a lot on the course.  Hindsight is a wonderful thing and I’ve learnt a lot about him today. I’m basically really pleased with how he’s equipped himself in stepping up a level.

I had never planned to do more than the dressage with Hipp and Tim as both of them ran last weekend at Burnham Market – I do like it when events put on sections where you can do the tests you will have to ride at your target three day events, it’s really beneficial as a rider. I was very pleased with how both Hipp and Tim went although I won’t be lulled in to a false sense of security as there was very little atmosphere by the dressage arenas  – Badminton will be in another league in that respect! I again took away lots to work on watching the videos back but was basically pleased that the horses went well and felt secure.

I was rider rep at Weston Park today, which can be a busy job or not, depending on the event, the ground, the weather, the courses we are presented with etc. However thankfully today I had a very easy day. As rider rep you are basically the point person for all rider comments so if a rider is concerned about something or has a question they raise it with you and you then address it with the event TD (technical delegate).

Anyway I’m about to sit down with Jenny and plan out each horse’s work programme for the new week that is almost open us. Its going to be a busy one with the gallops (twice), lessons with Bettina, show jumping at Weston Lawns and Eland Lodge with the young horses on Saturday.

Fun fun fun. Until next time.