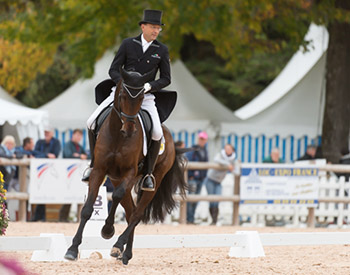 Today was the first day with anything of significance going on at Pau! The day started bright and early with the trot up. It doesn’t really get light here until about 7.30am-ish so the sun was still coming up as we trotted up at around 8.00am. Alfie ended up second to trot up and he sailed through, very bright and feeling very well in himself, strutting his stuff as the sun was rising behind him.

After the trot up I gave him a good stretch as we had our dressage to come later in the afternoon.

The time for our dressage came around soon enough and we got ourselves ready. Emily had Alfie gleaming and looking great for the dressage. He warmed up beautifully outside and I felt he’d had just about the right amount of work.

I waited until my time and the previous horse had come out before going in to avoid the clapping but as a consequence didn’t have much time before they rang the bell and wanted me to go in. Hence Alfie was still a bit on his toes and not really with me as I went up the first centre line which was a shame as he wasn’t really 100 percent settled. He then took exception to the judges as I moved off, rather spoiling our whole entrance which was  a bit gutting.

HOWEVER with all his training we managed to quickly get our act together and start clawing the marks back from the next movement onwards and he began to settle as we worked our way through the trot walk and then canter work. We ended up on a respectable 42.9 at the end of the first day of dressage. He got some very good marks after the first movement, only losing marks for submission (which was fair) and I even managed to get a 9 for my riding which was pleasing!

I’m sure I wont be in second place after the second day of dressage, however I also feel certain the event won’t be a dressage competition as there is plenty to do on the cross country course with lots of open distances and accuracy questions. So watch this space.

Tomorrow will be all about further course walking for me ahead of Saturday afternoon’s cross country.